Digital image correlation (DIC) is a surface displacement measurement technique that can capture the shape, motion, and deformation of solid objects. Rudimentary DIC results are easy to obtain, but reliable, high-quality DIC results can be difficult to achieve. The goal of digitalimagecorrelation.org is to equip new DIC practitioners with the basics of DIC so they can produce optimum measurements in a time-efficient manner. As a follow-on to this brief website, readers are strongly encouraged to continue their study of DIC with the “Good Practices Guide for Digital Image Correlation” from the International DIC Society.

The content of digitalimagecorrelation.org is organized for DIC learners to gather the most important information by reading from start to finish, while more experienced users can jump ahead to a section of interest. The subject matter is intentionally simplified to be accessible to engineers of all skill levels, including undergraduates. Mathematical definitions and derivations are avoided, but should be reviewed and understood by DIC practitioners once their basic skill level is established. At the conclusion of each section, suggestions are provided for more detailed resources.

The basic operation of DIC is tracking a pattern (often called a speckle pattern) in a sequence of images. The process of a DIC experiment (illustrated below) can be divided into three steps: (1) obtain a pattern on the sample for tracking, (2) capture images of the sample during motion/deformation, and (3) analyze the images to compute the sample surface’s displacements. 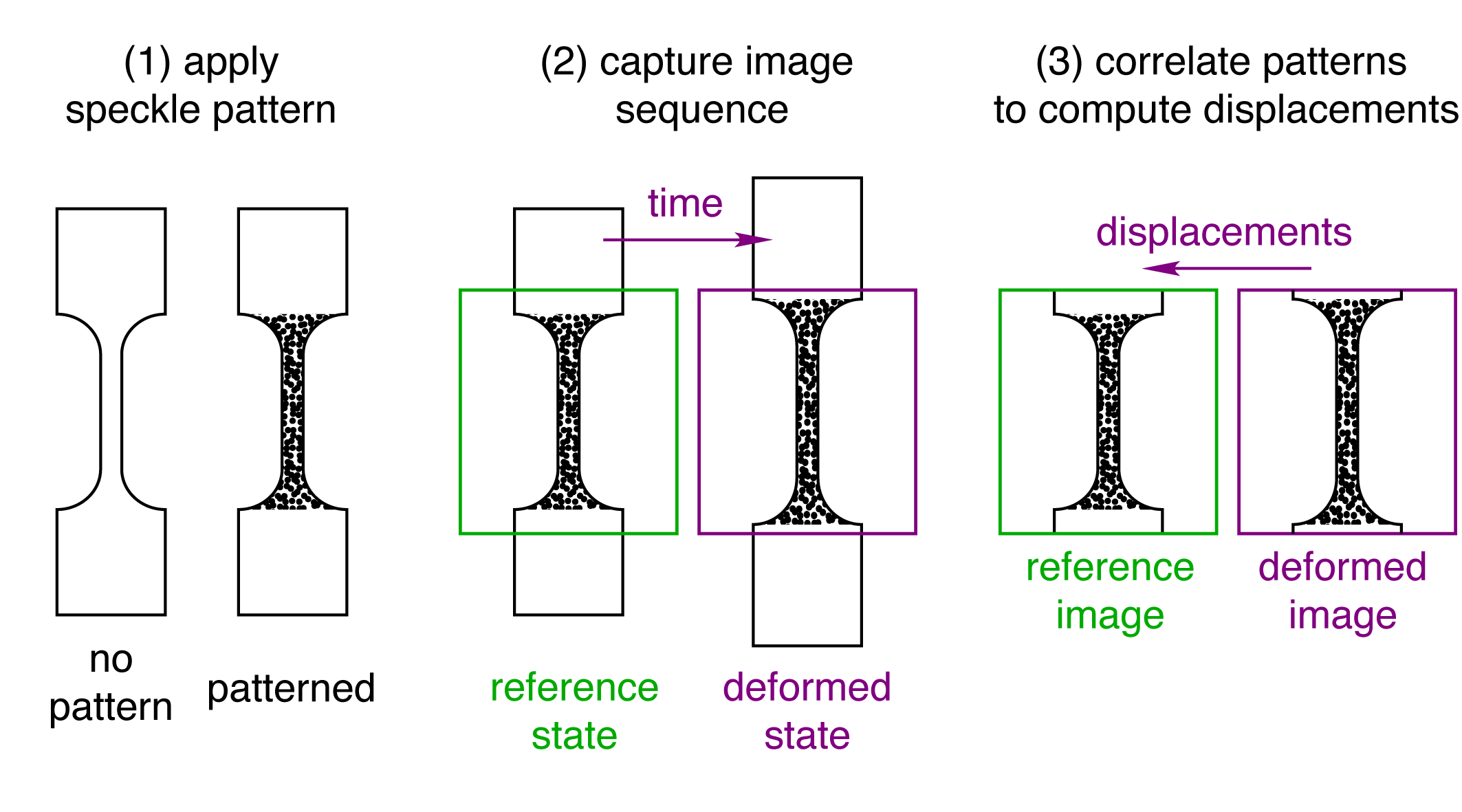 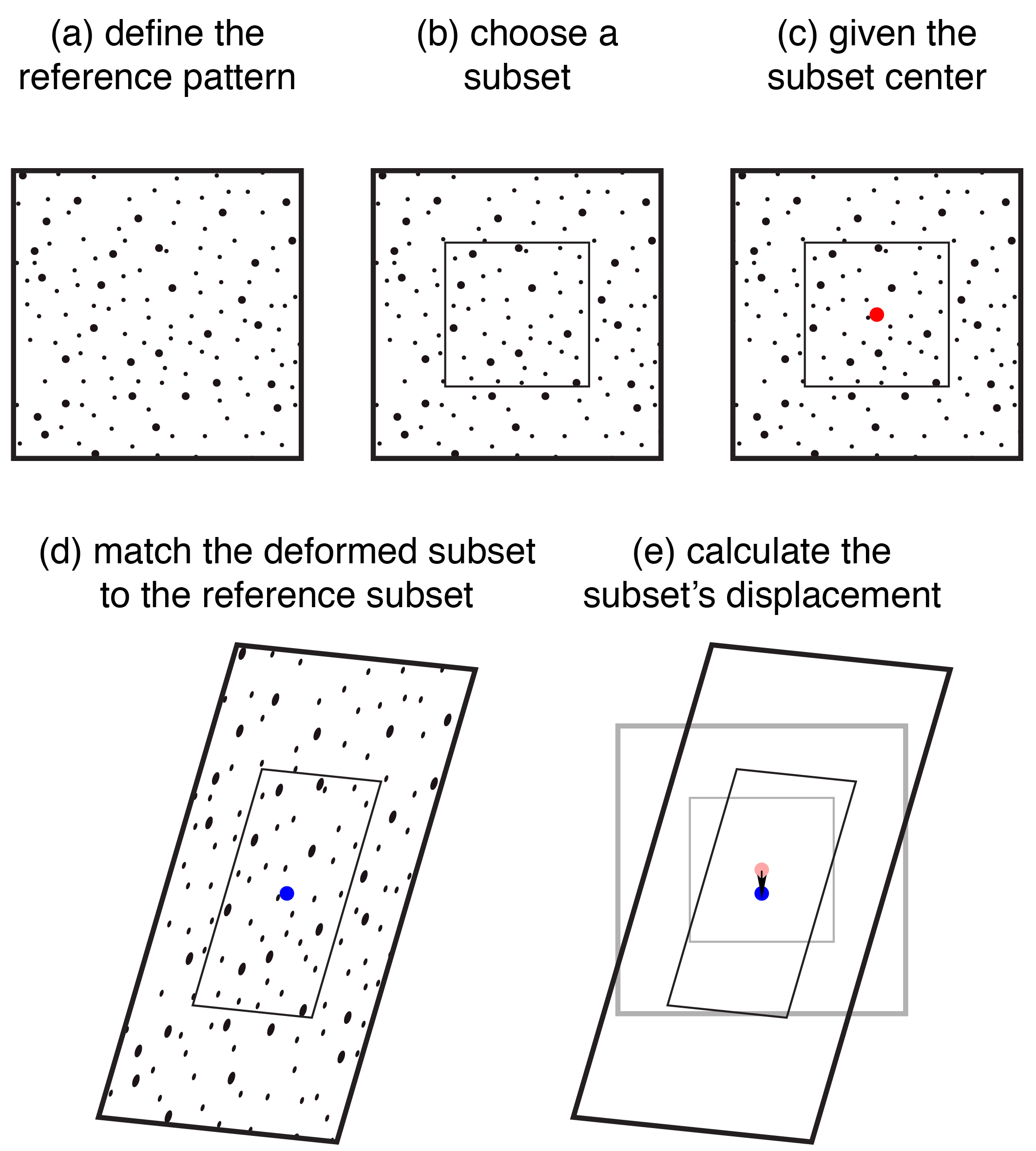 The previous example computed the displacements from one subset, but DIC computes a field of displacements by tracking multiple subsets. The same procedure as before is repeated, except this time with four equally-sized subsets in a two-by-two grid. This yields four more points with displacement information, for a total of five data points. 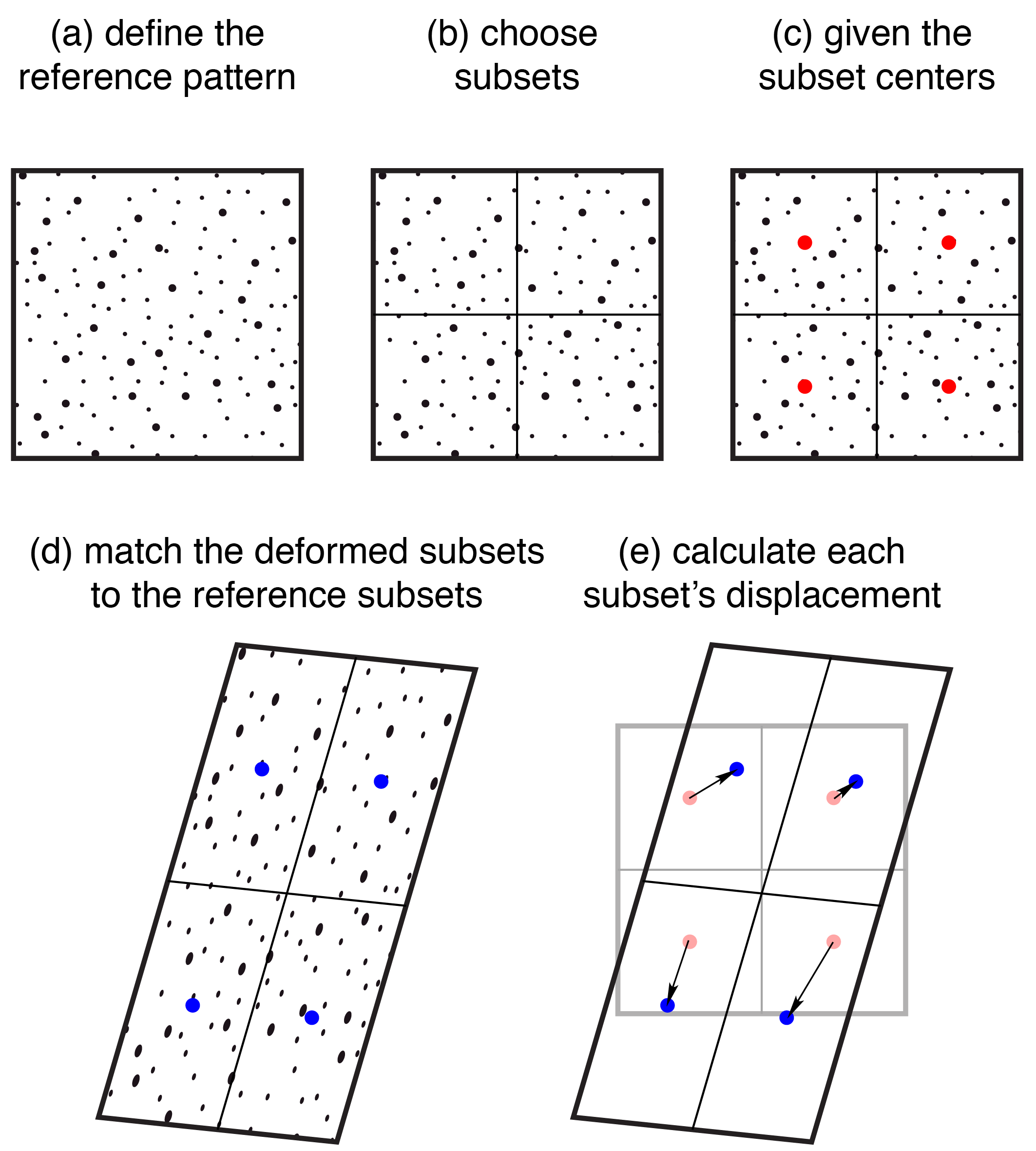 From the five subsets (one from the first example, and four more from the second example), there are five total points for which the displacements have been calculated. Each of these points can be referred to as a DIC point. 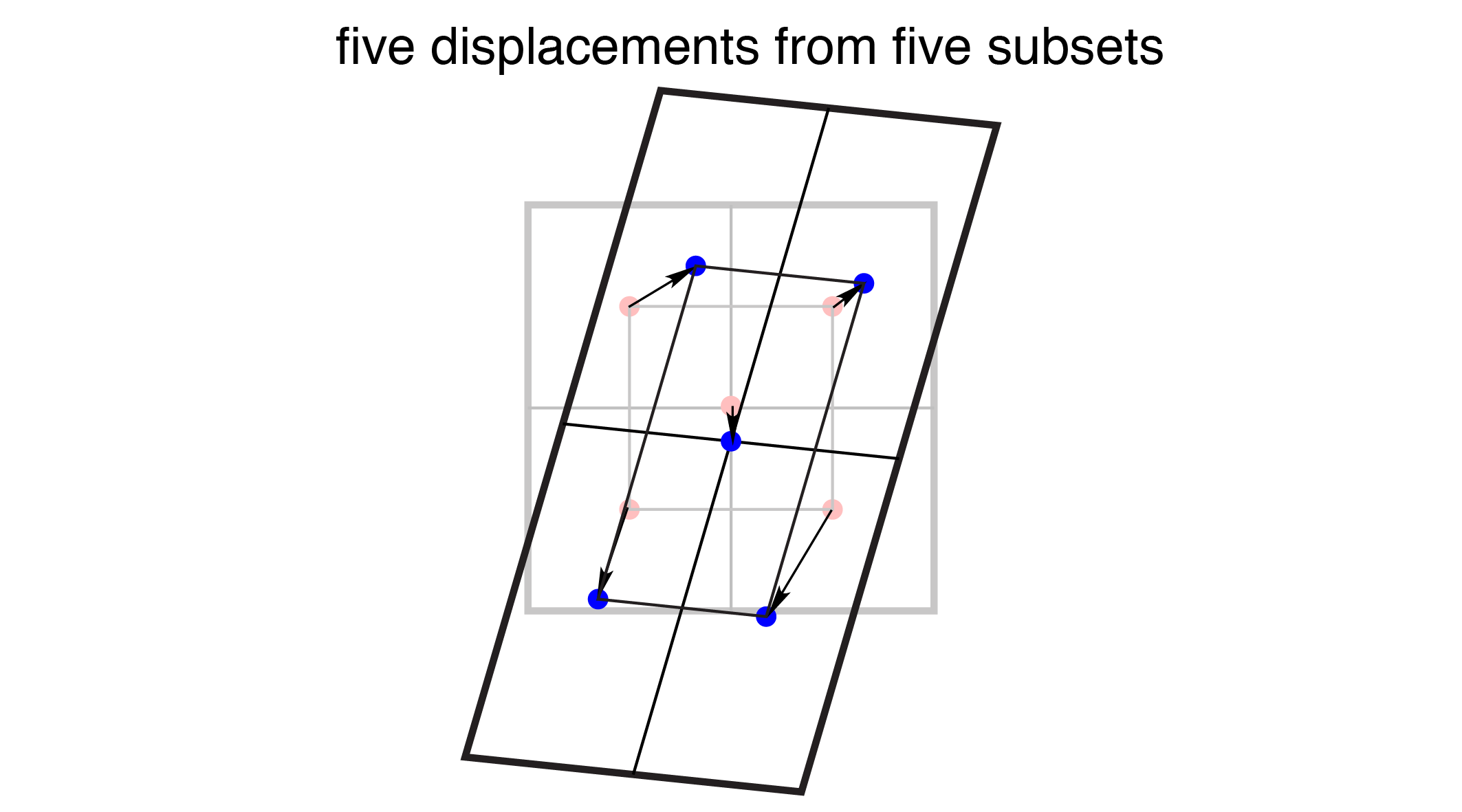 DIC is commonly utilized to study the mechanical properties of solids. One of the most common experiments for solid materials is a uniaxial tension experiment, shown in the schematic below. The goal of this experiment is to quantify how much the material deforms when a force is applied. There are many different ways to measure the deformation of the material, including strain gauges, extensometers (mechanical, laser, or optical), and DIC. While strain gauges and extensometers provide a single measurement of strain or displacement in the material, DIC can provide many displacement measurements across the material. With displacements across the material, DIC can capture the local deformations that arise from inhomogeneity, cracking, stress concentrations, plastic instabilities, phase transformations, and other localized material phenomena. 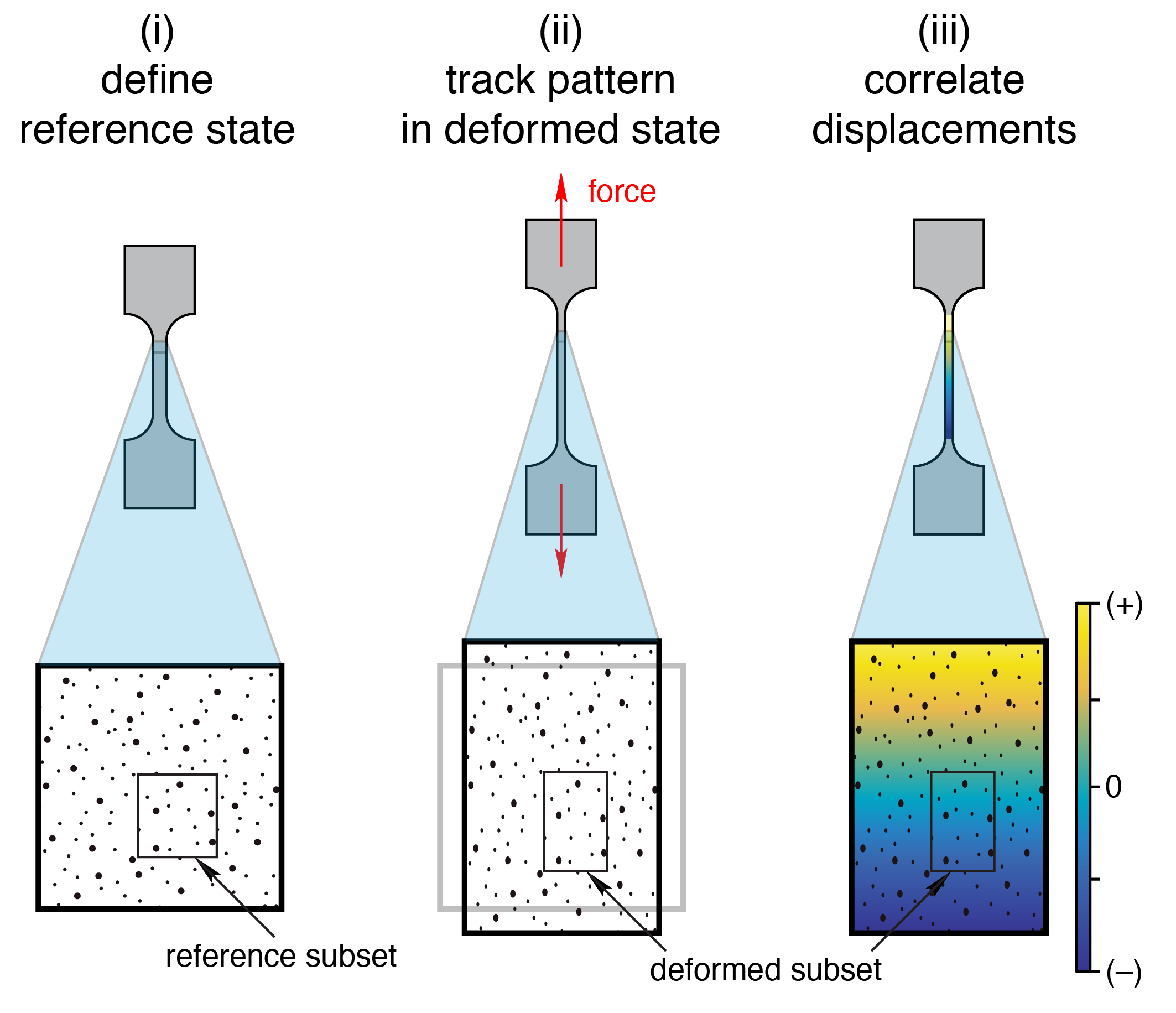 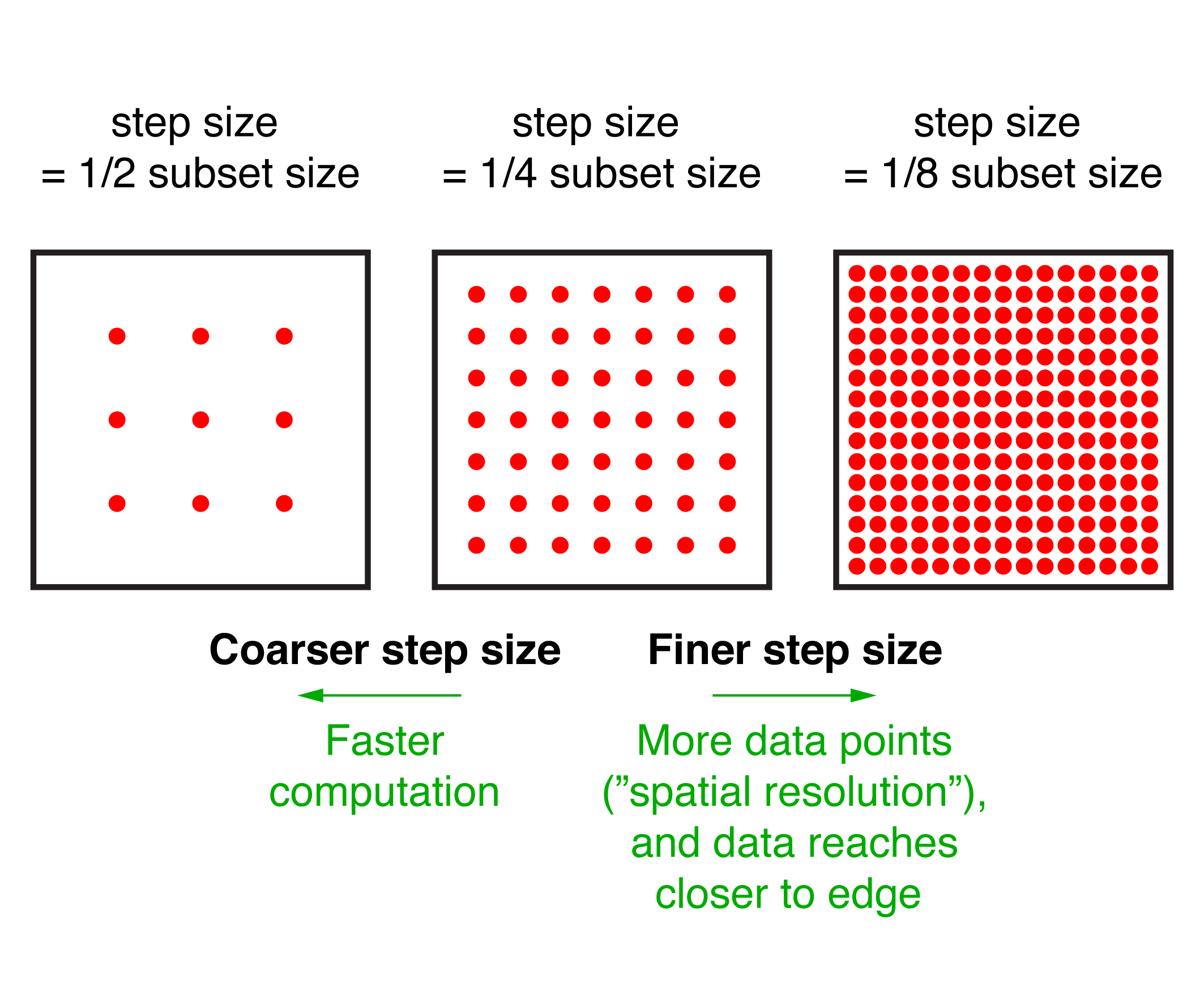 Two important questions for planning DIC experiments are (1) What is the smallest displacement that this experiment can reliably measure?, and (2) What is the image exposure time that should be used? 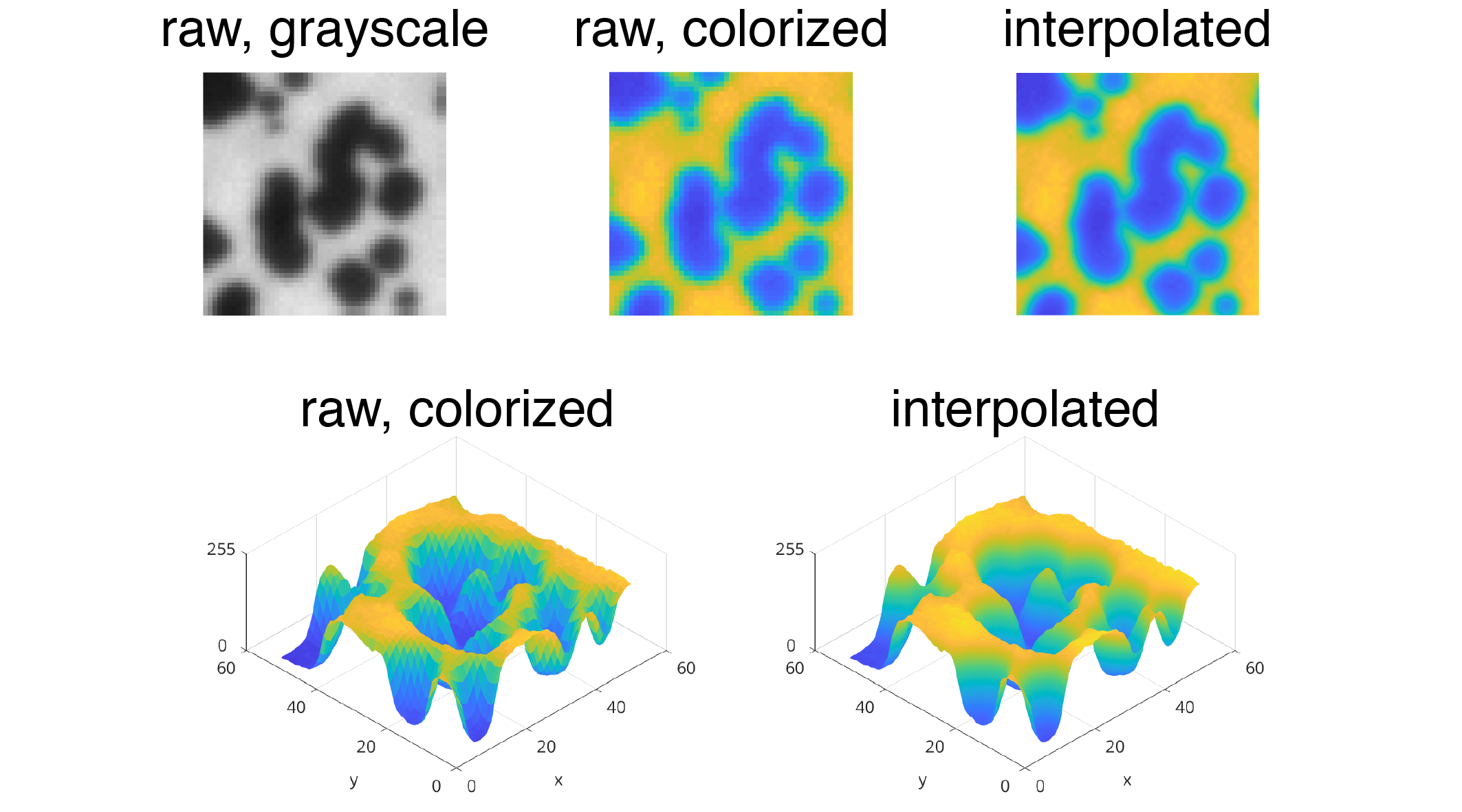 Computing strains is a common post-processing step with the displacements from DIC. Generally, spatial strains are computed from the displacements with a spatial derivative that has a filtering operator. This filtering in the strain calculation can blur highly-localized deformations with sharp features or discontinuities. With spatial filtering to compute the strains, the sharp features are smoothed out and can hide key phenomena like slip bands (Stinville, et al. doi:10.1007/s11340-015-0083-4).

2-D DIC assumes that the sample’s deformations are constrained to a plane that is parallel to the camera. In practice, out-of-plane motion can be a large source of error for 2-D DIC (Sutton, et al. doi:10.1016/j.optlaseng.2008.05.005). Also, images can have distortions that introduce error into DIC measurements. For example, camera lenses and optical microscopes generally have barrel distortions.

An important note is that 3-D DIC can only measure displacements on the surface of a material, not within the three-dimensional volume of a material. This extension of DIC from pixels to voxels (three-dimensional pixels) is called digital volume correlation (DVC). To measure displacements within a solid, the imaging system must be able to see inside the material, and the algorithms of DIC must be extended to capture displacements through the volume. Two examples of imaging systems that can see inside materials are X-ray tomography and confocal microscopy.

A comparison among 2-D DIC, 3-D DIC, and DVC is illustrated below. 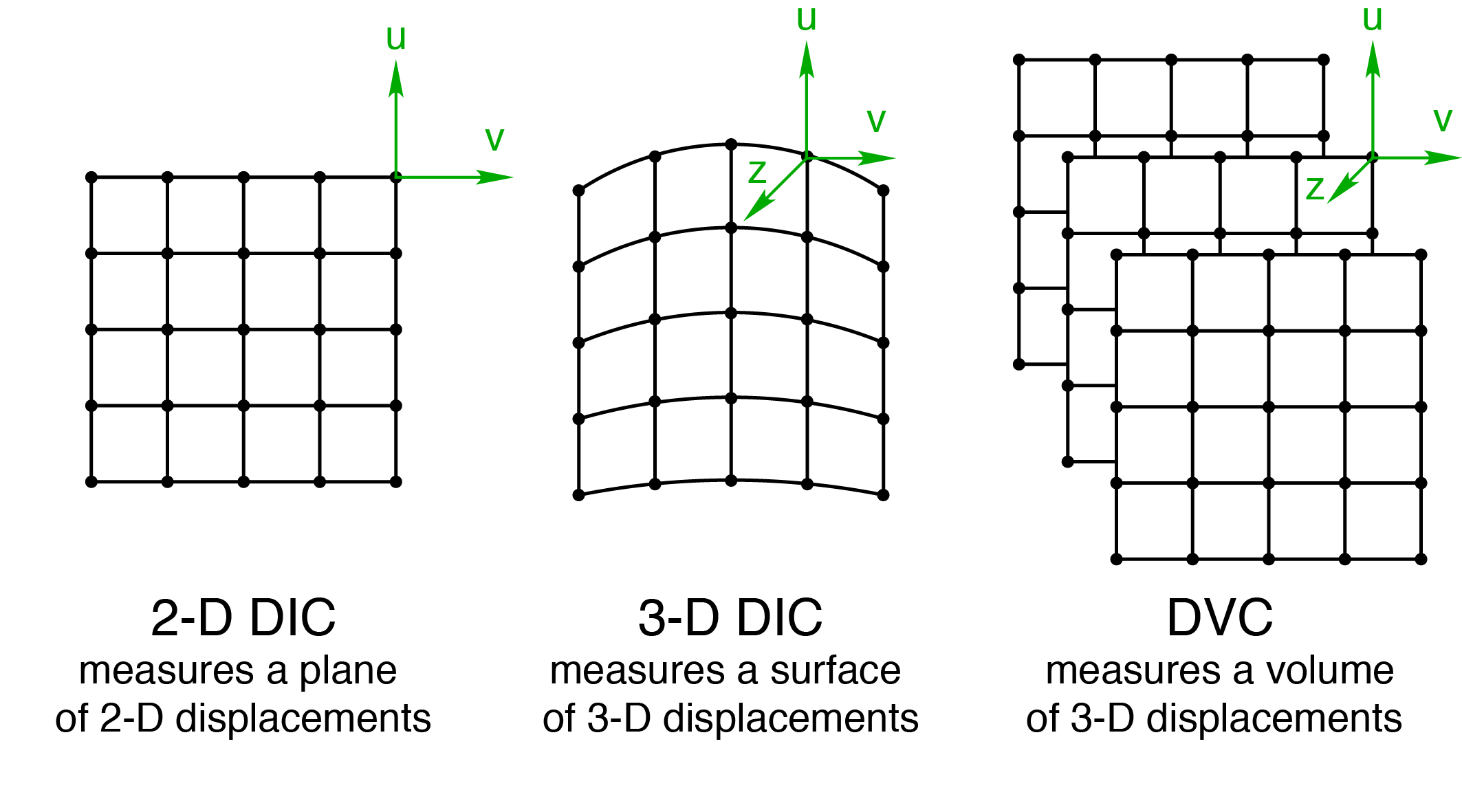 A second way to categorize DIC algorithms is by the pattern matching technique. The pattern can be separated into multiple subsets that are individually matched. This is called local DIC. Alternatively, the pattern can be matched in one go using a finite-element based approach. This is called global DIC. Local DIC was introduced before global DIC, and local DIC is more popular. Many of the principles in this guide apply to both local and global DIC, but details that only apply to local DIC (such as subsets) are included.

In most cases, the sample’s natural surface is not the best pattern that could be achieved. There are many ways to apply artificial speckle patterns, and the main techniques are listed below.

Painted speckle patterns are popular because paint is relatively compliant to most engineering materials, and high-quality speckle patterns can be applied quickly with spraying paint. Since paint colors other than black and white will inherently have less contrast, black and white paints are recommended. Using white paint as the background and black as the speckles is favored over the converse order because black paint maintains better contrast over white paint (LePage, Shaw, Daly. doi:10.1007/s40799-017-0192-3).

If the sample will undergo large deformations and/or high strain rates, then plan to perform the experiment within 24 to 48 hours of painting. As the paint dries and hardens, it loses its ability to deform with the sample (Reu. doi:10.1111/ext.12147). A range of speckle sizes can be produced with sprayed paint. Artist grade airbrushes, such as the Iwata CM-B, can produce speckle sizes between 10 and 100 microns by varying the airbrush pressure (more pressure creates smaller speckles). Cans of spray paint can produce larger speckles, in the range of 100 to 1000 microns.

For hyperelastic materials (including many elastomers, polymers, and biomaterials), paint is not stretchy enough to track with the sample as a speckle pattern. Inks and dyes that permeate the sample material can be viable speckle pattern options. Stamping, masking, spraying, and stenciling can be deployed to apply the ink or dye. For example, biological soft tissue can be stained with methylene blue and then airbrushed with white paint for speckles (Lionello, et al. doi:10.1016/j.jmbbm.2014.07.007). Some DIC practitioners use permanent markers, as well.

For moist or sticky materials, such as silicone-based rubbers, powder particles may adhere better than paint. Graphite powder is popular for dark speckles. Alumina, talc, or magnesium oxide can be used for a white basecoat. Another use for powder patterns is achieving smaller speckles than painted patterns can produce. Using a combination of filters and compressed air, powder particle patterns smaller than 10 microns can be deposited on a smooth/polished sample to form a speckle pattern (Jonnalagadda, et al. doi:10.1007/s11340-008-9212-7).

In some cases, the sample surface can be engraved with laser cutter. This method provides patterns that can remain intact during high-temperature tests (Hu, et al. doi:10.1007/s40799-018-0256-z).

For even smaller speckles than powders (about 20 to 100 nanometer speckle size, for scanning electron microscopy digital image correlation), self-assembled nanoparticles can be utilized (Kammers and Daly, doi:10.1007/s11340-013-9734-5).

Lithography is another method for achieving small speckle size, with the benefit of a higher degree of control than most other microscale patterning methods (Cannon, et al. doi:10.1007/978-3-319-51439-0_34).

To illustrate some of these concepts about speckle patterns, here are examples.

First, this is a carbon fiber that has been speckled with gold nanoparticles, following the method of Kammers and Daly (doi:10.1007/s11340-013-9734-5). Recall that a pattern should have random positions of uniformly-sized speckles. This pattern accomplishes both of these goals pretty well. The nanoparticles are all about 50 nanometers in diameter and positioned randomly. However, there are occassional clumps of nanoparticles that would detract slightly from the correlation quality. 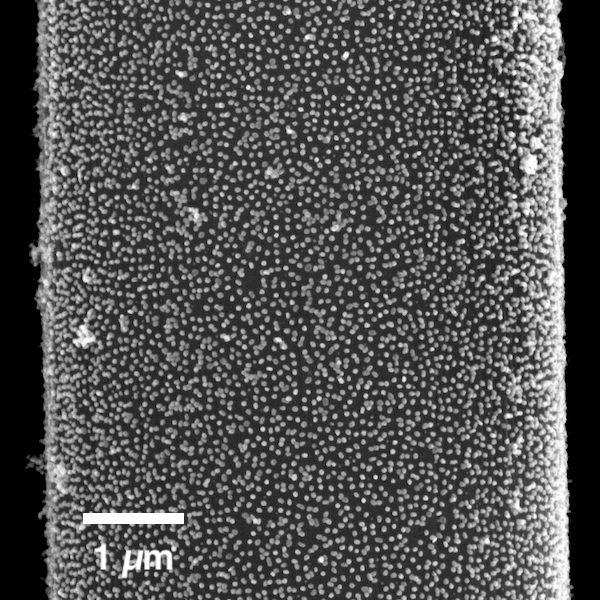 Second, this is an airbrush-painted speckle pattern on a metal sample. There is good randomness in the speckle positions, but unlike the nanoparticle pattern above, this painted pattern suffers from non-uniform speckle size. Some of the speckles are too large (much larger than 7 pixels in diameter) and others are too small (less than 3 pixels in diameter). Nonetheless, this pattern would likely still correlate and produce results, albeit with less spatial resolution than possible for given the field of view. 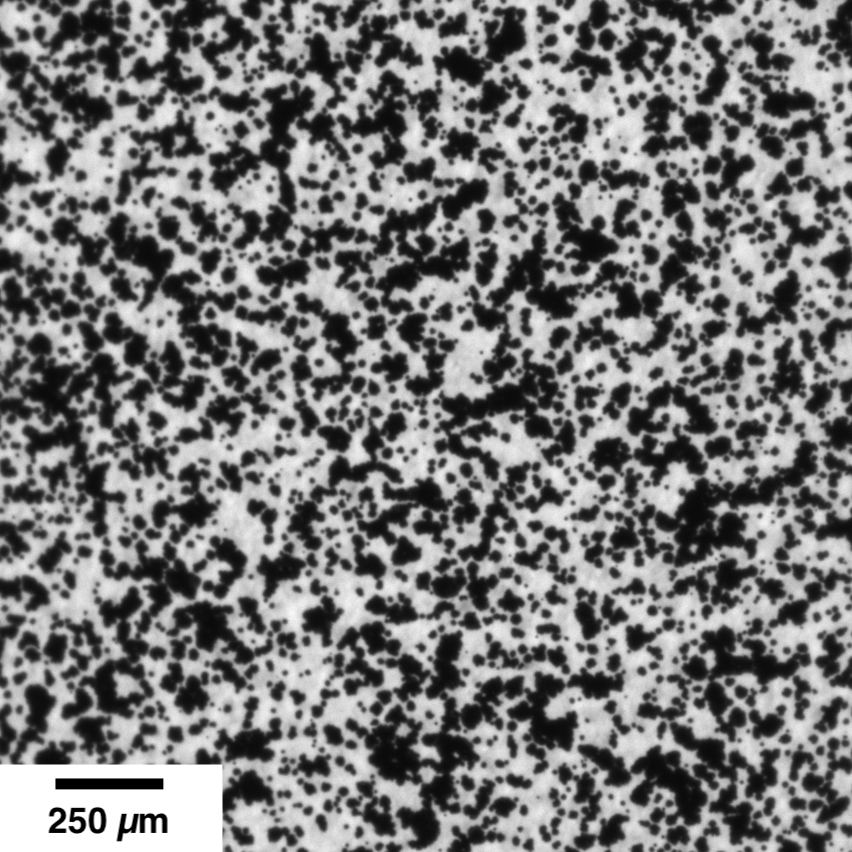 The key step of data collection for DIC is capturing images. In general, good photography or microscopy practices translate to good DIC images, but there are extra considerations for optimizing DIC results.

Building a successful DIC setup requires making the right equipment choices. For optical DIC systems with cameras, lenses, and lights, there are a few selection criteria that optimize the system.

Tips on cameras, lenses, and lights

An example of a 3-D DIC system is shown below. There are two cameras with two lenses, two lights in stereo with the cameras (larger lights), and another fiber optic light for back-lighting the glass calibration grid. Note the tensile sample in the mechanical testing frame has a mechanical extensometer on its gauge section. Also, there is a fan outside of the image for gently blowing air between the cameras and the sample to minimize heat waves, following Jones and Reu (doi:10.1007/s11340-017-0354-3). 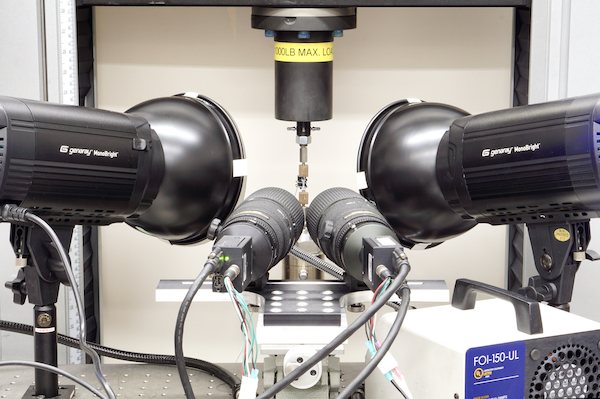 For 2-D DIC, the only calibration is a length scale conversion from the pixel space of DIC to the image’s magnification, so the calibration needs a line of known length (such as the horizontal field width, or HFW). For 3-D DIC, the cameras must be calibrated with respect to one another in space, so a line is no longer sufficient. Thus, common calibration procedures involve a calibration grid, or a plane of known dimensions. This concept is illustrated below. The artificial speckle pattern and mock calibration grid were generated with the Speckle Generator and Target Generator softwares from Correlated Solutions, Inc. 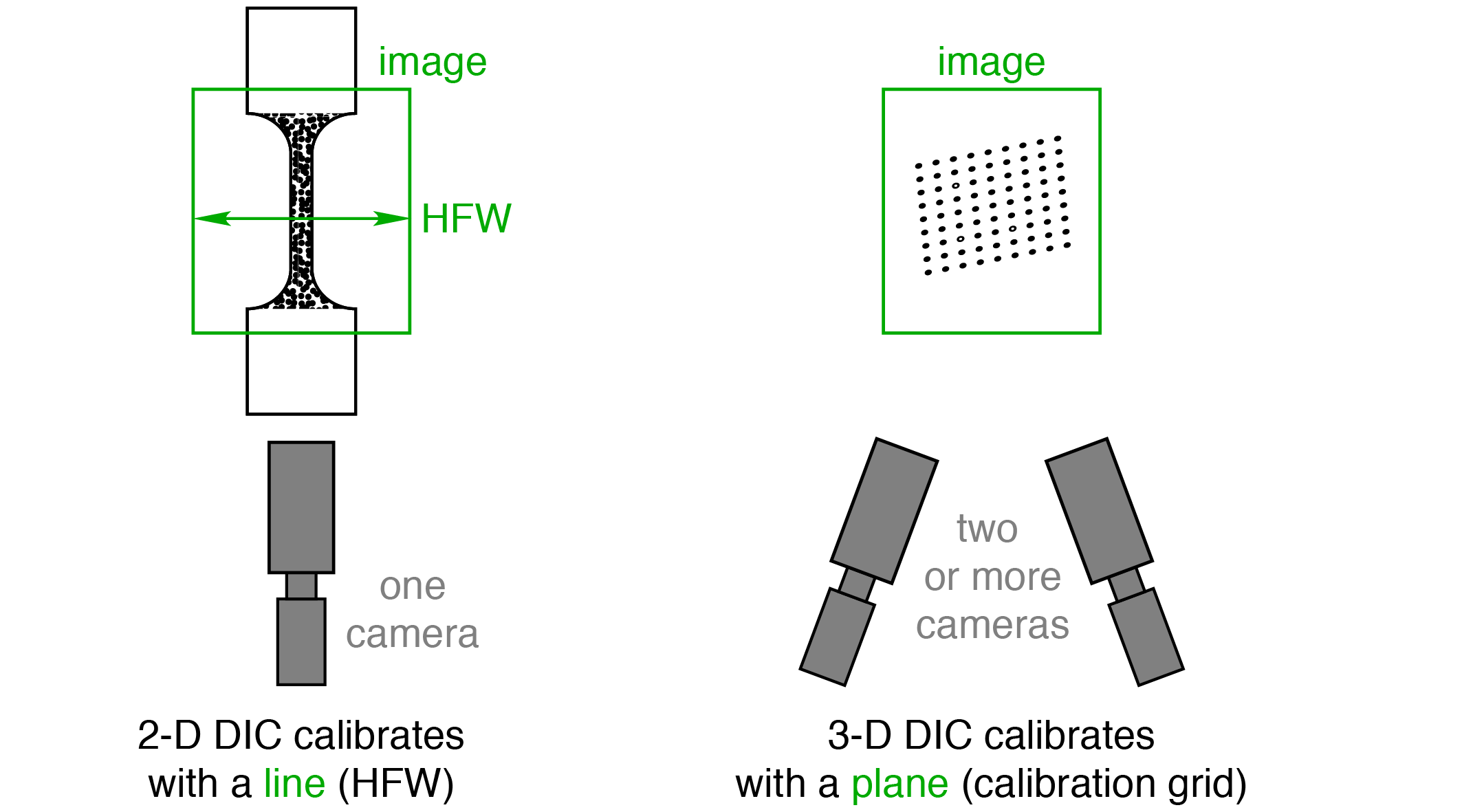 For 3-D DIC, the calibration procedure varies among DIC software packages, but general best-practices are listed below. 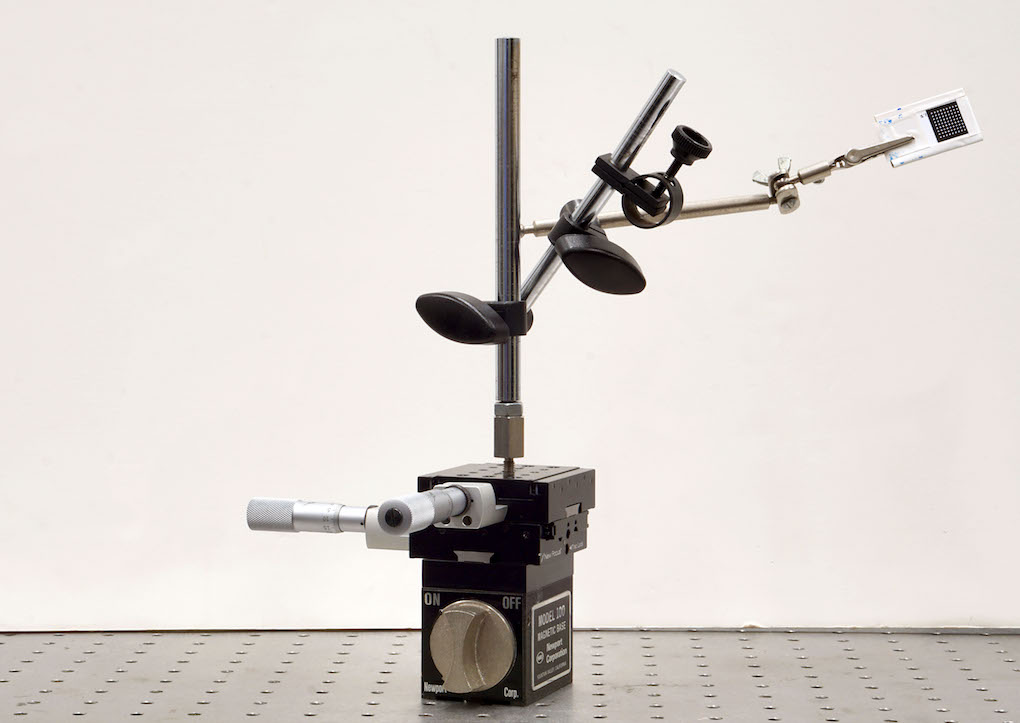 An important question for a DIC practitioner to ask is, “How accurate are these measurements?” Evaluating DIC errors is important because DIC results can vary widely among setups, speckle patterns, correlation parameters, and other conditions. It is difficult to separate the relative contributions of individual error sources in DIC experiments, but the overall error of an experiment can be estimated with appropriate measurements. Two possible validation and error evaluation methods are discussed below.